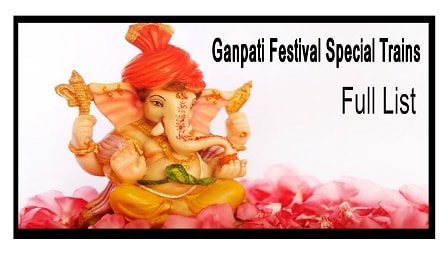 At the initiative of Shri Piyush Goyal, Hon’ble Minister of Railways and Coal, Government of India, Central Railway will run 132 special trains between CSMT/LTT/Dadar/Pune – Karmali/Sawantwadi Road/Ratnagiri/Pernem to clear the extra rush of passengers during Ganpati Festival. The details are as under –

Further to announcement of Ganapati special trains towards Konkan area, the following special trains will be augmented as mentioned for the benefit of passengers.

Wait Listed Passengers of above special trains may like to check their current status before commencing the journey.