The Nadikudi-Sirkalahasti new railway line project is being undertaken by South Central Railway to meet the aspirations of the people of Andhra Pradesh, particularly to those hailing from backward regions of Guntur, Prakasham and Nellore Districts, which were hitherto unconnected o­n the rail map.The project, is sanctioned in the year 2011-2012 at an estimated cost of Rs. 2289 Crores for a distance of 309 kilometers, is destined to herald a new dawn of economic prosperity and development in the region, o­n the strength of a reliable rail route, which will open up new avenues of mobility. The initiative of the railways has met the co-operation of the Government of Andhra Pradesh, with the Indian Railways and the State Govt. bearing 50% of the project cost, each. In addition, the State Govt. has given land free of cost for the new rail line. 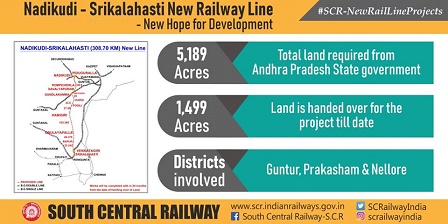 The Nadikudi-Srikalahasti rail line project will serve as a key link between the cities Guntur and Tirupati in Andhra Pradesh, being the shortest route between these two urban hubs. The line will enormously boost the potential for transportation of freight from the industrial belt of Guntur District of Andhra Pradesh to different parts of the state and beyond, besides generating a viable passenger transportation mode. The project connects Secunderabad-Guntur Branch line at Nadikudi of Guntur district and Gudur-Renigunta main line at Srikalahasti Chittoor district, and is expected to serve over 20 lakh people in the three districts of Andhra Pradesh. The Railways foresee traffic of around 10 lakh rail passengers utilizing the rail services o­nce the project is commissioned.

A very vital aspect of the project is that it will serve as a alternate rail route to decongest the busy Chennai-Howrah corridor rail line between Chennai-Vijayawada. This Chennai-Howrah line passing through the coastal districts of Andhra Pradesh is vulnerable to the vagaries of nature, particularly the cyclones and floods, resulting in serious traffic disruptions. Therefore, the potential of the Nadikudi – Srikalahasti new Railway Line is immense, since any such disruption can be overcome by running the trains o­n this alternate route, to the present coastal rail line. This line will also serve hinterlands and the backward interior areas of Guntur, Prakasam and Nellore Districts of Andhra Pradesh. Yet another gain is in terms of this new railway line providing connectivity to the interiors of the three Districts of Guntur, Prakasam and Nellore with Amaravati, the fledgling capital of the state, offering an economical and fast transport option. In terms of the freight traffic, it is expected that the rich mineral source belt of the region will gain a lot in terms of enabling transpiration of mineral resources to the market areas within the state and outside.

The project is being executed in 4 phases.

Phase-I, Section from New Piduguralla –Rompicherla (28.50 Km) and from Rompicherla -Savalyapuram (17 Km) is targeted for completion during 2018-19 financial year.